The definition of working and street child 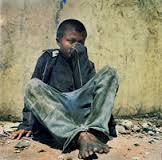 Working children are those children that are hired permanently as a workers that prevents them from going to school and threats their physical and psychic health. Child labor is seen by many countries and international organizations as an exploitative practice.

Child labor is very common and may include factory work, mining, and prostitution, agriculture, helping in the parents' business, having personal business (such as selling food) or unusual work. The most unacceptable forms of child labor is to use them in military affairs and child prostitution. Less controversial and often illegal (with some limitations) are of agricultural work during school holidays (seasonal work), business outside of school hours as well as acting or singing.

Child labor has been prevalent in different levels during the history, however with the initiation of the public education and changes that took place in working condition as a result of industrial evolution and also with the emergence of the concepts like worker rights and children rights, the issues were under the supervision of public. Child labor is prevalent in the areas with the low age of school leaving.

According to the International Labor Organization (ILO), annually 250 million children 5 to 14 years are deprived of their childhood. According to the statistics, 120 million of them will enter the labor market and are working full-time. 61% of these children are in Asia, 32% in Africa and 7% in Latin America. Trafficking of children entering major routes to market. Except for slave labor, prostitution and sale of children, human trafficking is the major way of entering children into market. Aside from slavery like working, prostitution and selling parts of the children's' body is the fate of these children

Child labor is a relatively complex issue and various factors influence it. Such as: family structure, poverty, sudden economic changes caused by the war and ... (leading to migrate to neighboring countries to work with ore wages) and the cost of education and the incorrect educational system.

Working Children are in very adverse conditions in terms of nutrition, health and perform dangerous tasks. The children can easily be abused by professional criminals, including thieves or drug gangs, heads of prostitution houses.

Factors such as the failure of family, war, poverty, natural or human accidents, abuse by adults, migration and violence are the most important factors that push children in to street.